Who can get married in Germany?

If you are aged 18 or over, you can get married without parental consent.

A man and a woman are getting married in a town hall.
Listen 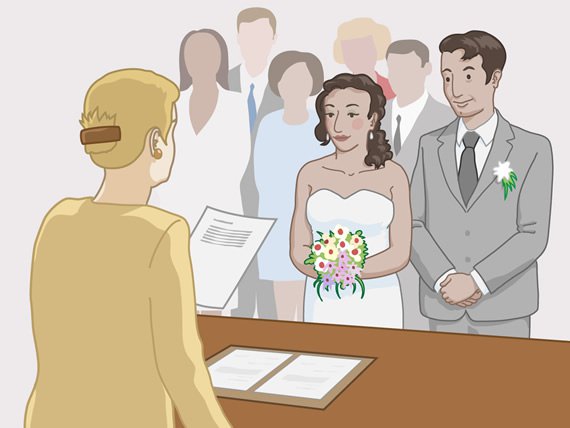 Other conditions for marrying in Germany

Two men are getting married in a town hall.
Listen

A marriage must take place in a registry office. If either of the partners is not German, there will be a consultation at the registry office beforehand, free of charge.

A couple can also get married in a religious ceremony led by a priest or an imam, for example. However, in Germany, such a ceremony does not mean that you are officially married yet.

A marriage is not possible if:

By getting married, both marriage partners take on new rights and responsibilities. For example:

A marriage that has been registered in another country and is valid there is also valid in Germany.

Only the couple decide

Sometimes other people decide whom you should marry. This is not customary in Germany. However, it is not forbidden by law provided both partners want the marriage to go ahead.

Living together without being married

A relationship before marriage and affairs with other partners during marriage are not forbidden in Germany and no one is punished by law for this behaviour.

Sometimes, this behaviour is not accepted within families and some family members want to punish young men or women who act in this way with physical violence, or even kill them. If you believe that you are in danger of this, go to a counselling centre or directly to the police.